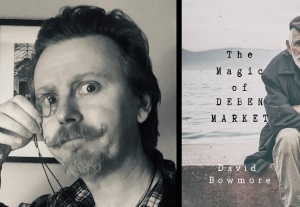 Another author you wish you knew – David Bowmore – talks about The Great Clarendon House Writing Challenge.

As for the contest, I was amazed that I had made it even into the first round. My story ‘The Waiting Room’ was more of less true – I just wrote down the scene that happened in front of me and then embellished the ending. The western, ‘His Mama’s Son,’ was the most fun to write and has taught me to experiment and not be afraid of trying something new. The last story, ‘Bonnets and Betrayals,’ pushed me to my limits as I didn’t know much about Jane Austen, but I was happy with the end result. When I read Julie’s and Peter’s entries, I knew I wouldn’t win but I was honoured and stunned to have made it to the final with two such fabulous writers. All the stories from the very beginning were excellent – The ICWG does have such a huge pool of talent.

David Bowmore is the author of “The Magic of Deben Market.” You can connect with David at Clarendon House Anthologies and www.davidbowmore.co.uk

You can subscribe to the Inner Circle Magazine here. 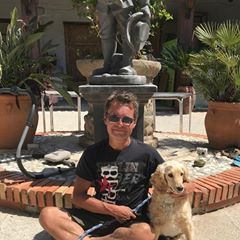 Another author you wish you knew – Peter Astle – answers the question: How do you feel about writing contests? Have you entered any competitions?

“I entered the Great Clarendon House Writing Challenge with no thoughts of winning whatsoever.  As a subscriber to the Inner Circle Writing Group Magazine I thought I’d give it a go.

I’ve entered writing competitions before without much success, but this competition interested me because we were to be given specific ‘challenges’ as the competition progressed.

We were promised that the challenges would become increasingly more difficult for those who made the next round and I wanted to see how far I could go.

I’m a fan of Roald Dahl’s short stories for adults and, as such, enjoy writing twist endings.

My first contribution was ‘Donors’, where the characters talking on a hillside turned out to be dogs, reincarnated from people who carried organ donor cards.

The second challenge was to write a western set in the 1800’s story in exactly one thousand words. This stumped me for quite some time. I’m from the UK and have never read a western in my life. I did some research, read some Louis L’Amour and visited online western sites and gradually got the feel for the old American west. Not confident with gun slinging lone cowboys, I chose a travelling piano player as my lead character who happened to be a hustler with a wooden leg. The twist at the end – which I won’t reveal – possibly got me into the grand final with Julie Eger and David Bowmore.

Google came to the rescue. I was amazed how many sites there were about the Regency period. I read some Jane Austen and discovered that the ‘style’ seemed to be extremely long sentences and paragraphs with lots of semicolons. The characters were predominantly the British upper classes, Lords and Ladies, the situations seemed to be affairs of the heart and the settings were lavish.

Although we were allowed to write in any genre – so long as it was in the Regency ‘style’ – I chose to set my piece in the early 1800’s.

I discovered scandal magazines were all the rage––as were masquerade balls––at the time, so I combined the two and wrote ‘Masquerade’ for my final entry. The first draft was not very good as I put in too many characters. Eventually I thinned it down and was happy with the story and the twist ending, but the process took me right to the wire.

Both Julie’s and David’s final entries were excellent.

Voting was extremely tight and I was lucky enough to win by a couple of votes.

Obviously, I was over the moon. Like I said, I’ve not had great success with competitions in the past.

It was a great writing journey. What I learnt most was this: when you’re in a competition like this one where you have to submit something within a short period – two weeks – you make damned sure you DO submit something – good or bad. You can’t not submit something, so that pressure drives you.

I wish I could be as disciplined with all my other writing projects.”

To read Peter’s winning stories you can subscribe to The Inner Circle Magazine at this link: https://www.clarendonhousebooks.com/inner-circle-magazine-subscribe-pag

Another author you wish you knew- Ha! Ha! – Me – Julie Eger – answers a question about writing contests.

I recently entered a competition called The Great Clarendon House Writing Contest put on by the Inner Circle Writing Administrator, Grant Hudson. I don’t usually enter contests because I have a tendency to think my stories won’t be good enough to win, so why bother? But I pushed myself to enter, with a little story that had to be exactly 500 words for the first round of the competition, a story about a woman who loved her dog, right up until the end. ‘Around the Corner’ made it into the top ten and into the next round. I was amazed!

The next part of the challenge involved writing a 1000 word Western. This was not a genre I was familiar with but I gave it try and came up with a story about a man who believed his ranch animals spoke to him and this craziness led to him being accused of murdering his wife. ‘Grave Circumstances’ made it into the final three for the contest!

The next part of the contest involved writing a 1500 word story in the style of the Regency Era. After receiving this news, I headed straight to my local library and asked for help. They talked me through a few things, sent me home with ‘Pride and Prejudice’ and ‘Emma’ so I could learn about the style of that era as this was something I was completely unfamiliar with. I ended up writing a story about an English gentleman who turned to robbing people, and in the end he gets his just reward for his misdeeds, titled ‘The Bacon Bandit of Banbury Quarter.’

The competition ended August 31, 2019. I found out my story didn’t win, but after everything, I feel like a winner, having tried, having learned things about writing I never knew before, and for having pushed myself to write stories I would have never written, stories I’m proud of, if it wasn’t for this competition.

If you have a chance, look for a competition that feels right, and see if you find you’re pushing yourself to write beyond your wildest dreams. Your stories might amaze you!

To learn more about the Inner Circle Writers’ Magazine you can subscribe at the link below.

Once Upon A Blank Page

Once Upon A Blank Page